The July issue is now live!

Tell us what you thought about the July issue!

The July issue is now live!

(Flash may be delayed a day or two.) 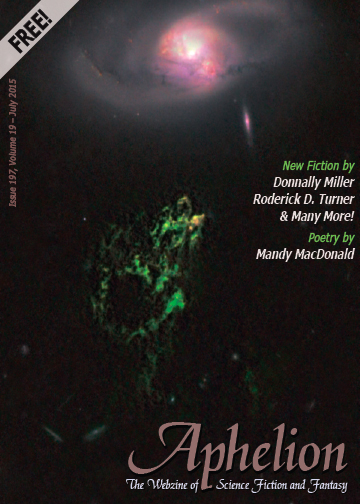 (Yes this is an actual NASA pic. I'm not sure what the green thing in it is, but to me it looks like a green-tentacled monster. Just saying.
Hardcover, paperback, pdf, eBook, iBook, Nook, and now Kindle & Kobo!

A cooperative effort between 17 Aphelion authors. No part of any sales go to Aphelion.
Top

Re: The July issue is now live!

The 'green' is the right-half of a human skull...petting a kitty. Me likey.

Eddie: Code words - married, bought, 14, days, house = 14 divided by 2 is the number of weeks until the moon colludes (marries) the pi multiplied by 2 (weeks) 6.28 which is the dollar to kronor conversion in September 2015. 2 is the number necessary for marriage until the legalization of polygamy, which will not occur because the letters, 'e-d-d-i-e' are synaptic, thus conducting an energy channel of understanding in your simple but brilliant expose.

It must be further stated that 6.28 is important as .28 is the date in Sept with is three months (6 divided by two as magnetic polarity dictates that given 2, there must be 2 taken.