Here is another post I once wrote and that I recovered...

"The last of the mortals…” in "Steam-powered Dream Engines" - Anthology".

As previously anticipated, is eventually available on Lulu.com shop that British Steampunk/Sci-Fi Anthology titled "Steam-powered Dream Engines" by Rogue Planet Press, edited by Michele DUTCHER, Mr. Gavin Chappell ( and also by myself...), where you can find inside, among the many very good Steampunk stories by various authors, that new Steampunk/Sci-Fi Short-Story written by me in American/English,title " The last of the mortals…", set in the 1800s, up north, in the icy mountains of Norway, where the real Steampunk Age started (did it really in this strange world...?) and some very old people are unceasingly mining those old icy depths, searching the answer to their questions, and their needs, in a way…


This story has been written by me and my (unfortunately now dead) old friend Ernesto CANEPA, as it was mainly a very old idea of his that I completed and put on (electronic) paper with some modifications, after a very old boardgame session playing Snowdonia at my Club..

The GREAT cover and back-cover art is by author, and designer, John "DavidsonHero" Rose.

And the drawings inside (one per story...) are by comics designers Davide "Atog" MARESCOTTI and his wife Sara DELLA CASA:


Here are the links: 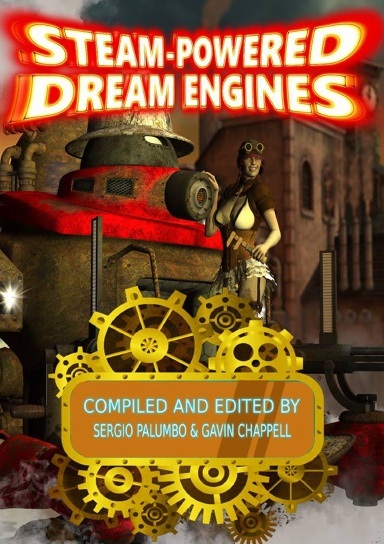 Foreword by Michele "Bottomdweller" Dutcher ( and myself...)


Here is the Full Table of Contents:

Eternity Engine by Thomas M. Malafarina
Just the Mechanic by Timothy O. Goyette
The Dark Side of Diablo Canyon by Dan "vila" Hollifield
The Cinderella Deception by I. Verse
Drop of Steel by R. Lipinski
Voices in the Dark by Michele Dutcher
A Voyage to Erythraea by John David Rose
Kami Kira- The God Slayer by Max True
The last of the mortals by Sergio 'ente per ente' PALUMBO and Ernesto CANEPA (edited by Michele DUTCHER)
Above the Mississippi by Teel James Glenn
Fruits of the Forest by John C. Adams
God is a Bullet by Scott Rinehart
Return to Earth by Bruce H. Markuson
The Engineer’s Watch by Justin Bienvenue
Enyo on Rails by E. W. Farnsworth
Henry and Sophie- Flying in Time by Grant Eagar
The Steam Cleansing Machine by E. W. Farnsworth
Vekaria Resort byJordan Elizabeth Mierek
Best's Cellar by Perry McDaid
Stainless by Shane Porteous
Preternatural Psychic Auditorium by M. S. Swift

Thank you! Nice to see this one back on the Forum--for reasons both selfish and unselfish, LOL!

the last news...we have been asked for a Second Edition of "Steam-powered Dream Engines" - Anthology to be published by an American publisher...we are waiting for approval from the previous publishers of the British Edition, and if they both are ok with this, we'll give the authors some news more soon, by e-mail, about the payment provided, and maybe some adjustments to be made about the book...we'll see...

The editors are still trying to catch up to I. Verse about his story in the book...The Cinderella Deception. I. Verse ...contact Sergio or write us back here.
Top
Post Reply
5 posts • Page 1 of 1

Return to “Fun and Games”